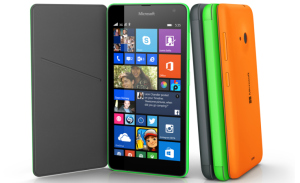 Previously referred to as the Nokia Lumia, Microsoft took over the line in recent years and Microsoft Lumia 535 will be their first fully Microsoft phone set to release in Asian markets in November 2014. It has not been stated when the line will swing into the rest of the world, but so far they are making a lot of promises to be the next in the high-end low-price niche for smart phones. The Microsoft Lumia 535 runs Windows 8.1, bringing their smooth operating experience to a larger market than PC and tablet users alone.

Rumors about  Microsoft’s Lumia 534 versus the Lumia 535 reality.

When phone and product manufactures are in development phases they often assign temporary numbers for models. It is sometimes the explanation for why you get model jumps such as the Lumia 530, to the next officially released Lumia 535. In some buzz circles glimpses of the product in process were speculated to be running the next evolution of Windows. In reality, the finished product, the Lumia 535, is a operating on Windows 8.1, with a superior support base of an impressive quad core Snapdragon 200 chipset with an optional dual sim configuration.

Microsoft’s Lumia 535 and on is their answer to the iPhone.

If Microsoft and Apple were two kids on a playground, the Lumia 535 could be considered the challenge of “Anything you can do, I can do better.” Microsoft’s Lumia 535 has a crisp and ultra clear 5 inch display, 5 megapixel wide angel camera, and superior processing power, all for around 110 Euros or about $137 USD. Using programs such as Skype and the Microsoft Office productivity suite, you can utilize the Lumia 535 for work and play. It also features Cortana, a virtual assistant that specializes in anticipating needs and making personalized suggestions for the user. The dual sim capacity allows you to have access to two separate accounts on the same device and seemly switch between both to never miss a call or message. What that boils down to is you can run both your personal and business communications from the save device.

Where is it available and when will I be able to get one?

The official announcement was just issued on November 19th, 2014. Microsoft has stated it will release to key test markets first before going global in distribution. They have made a lot of promises and presented a lot of promising demonstration, at this phase it is taking its first launch to see how well it performs and compares before moving forward.